More
Empty
First step - Choose a file
You can choose files 'CSV' 'TXT' and 'XLS' containing contacts items leading them to the device using  DROPBOX or using USB cable, Bluetooth, etc.
A file 'TXT' can be a generic file with fields separated by characters or TAB. In the second phase you can change this option.
Creating your own 'TXT' don't use 'Space' (" ") as the field separator. The default character is the semicolon (semicolon ";").
Some text files may have special characters to separate lines. The default character is the 'LF' (LineCarriage) .In the second mask you can change this option.
A 'CSV' file is typically created by applications such as Excel and usually has the semicolon ";" as the field separator and the 'LF' (LineCarriage) as lines tab.
In creating your own 'CSV' don't use 'Space' (" ") as the field separator. The default character is the semicolon (semicolon ";").
A file "xls" is a native file from applications Excel, OpenOffice Calc, etc. and has a fixed schema.
Android does not directly recognize the 'XLSM' format of Excel latest editions. So prepare the file in 'CSV' format or 'XLS'.
After selecting a file you can view it with the command at the top of the display thus passing to the second phase.
Second step - Control file scheme.
The preview reports only few lines to a generic control of the data.
When properly formatted layout will look like
field1 | Field2 | ... First line
field1 | Field2 | ... Second line .... and so on
Files 'XLS' appear formatted.
"TXT" or "CSV" may not appear formatted.Don't worry: you can change the layout options.
You can change the line separator and the field separator.
If it seems not well formatted TAB as a separator or understand if there are other separators such as commas in youe file.
See also the first row contains titles. If so, please click the 'first row with headers' option.
Check with the command at the top right to go to the third stage.
For files 'XLS' the app goes directly to the third stage.

In the grid you have yours imported columns.
On the top of the grid you can have the header line with titles imported from your file.
The other header line should be personalized with significant values.
Click on each column header and select the magnified title.
You need at least one of these fields:
Display name
Name
Last name
Company
If you have only one column that matches it will be reported as "displayed name" too.
If you have generic columns to be imported, you can select the title "Note" that can be used also for other columns (the app will collect data). Depending on your software (or on some devices) the item 'Notes' may appear or not.
You can not select the other columns more than once.
Confirm when finished.
You can register your schema for other matters. 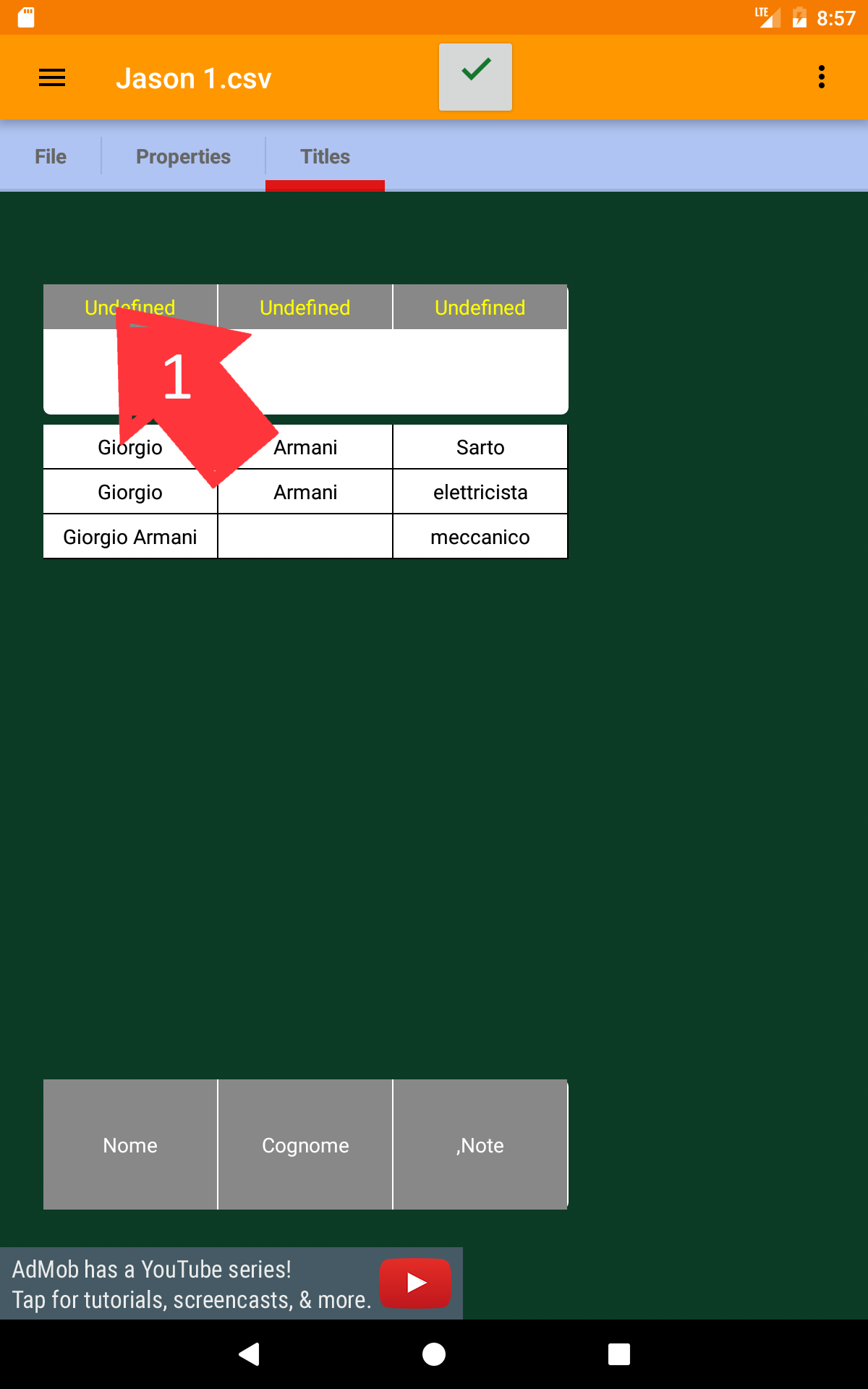 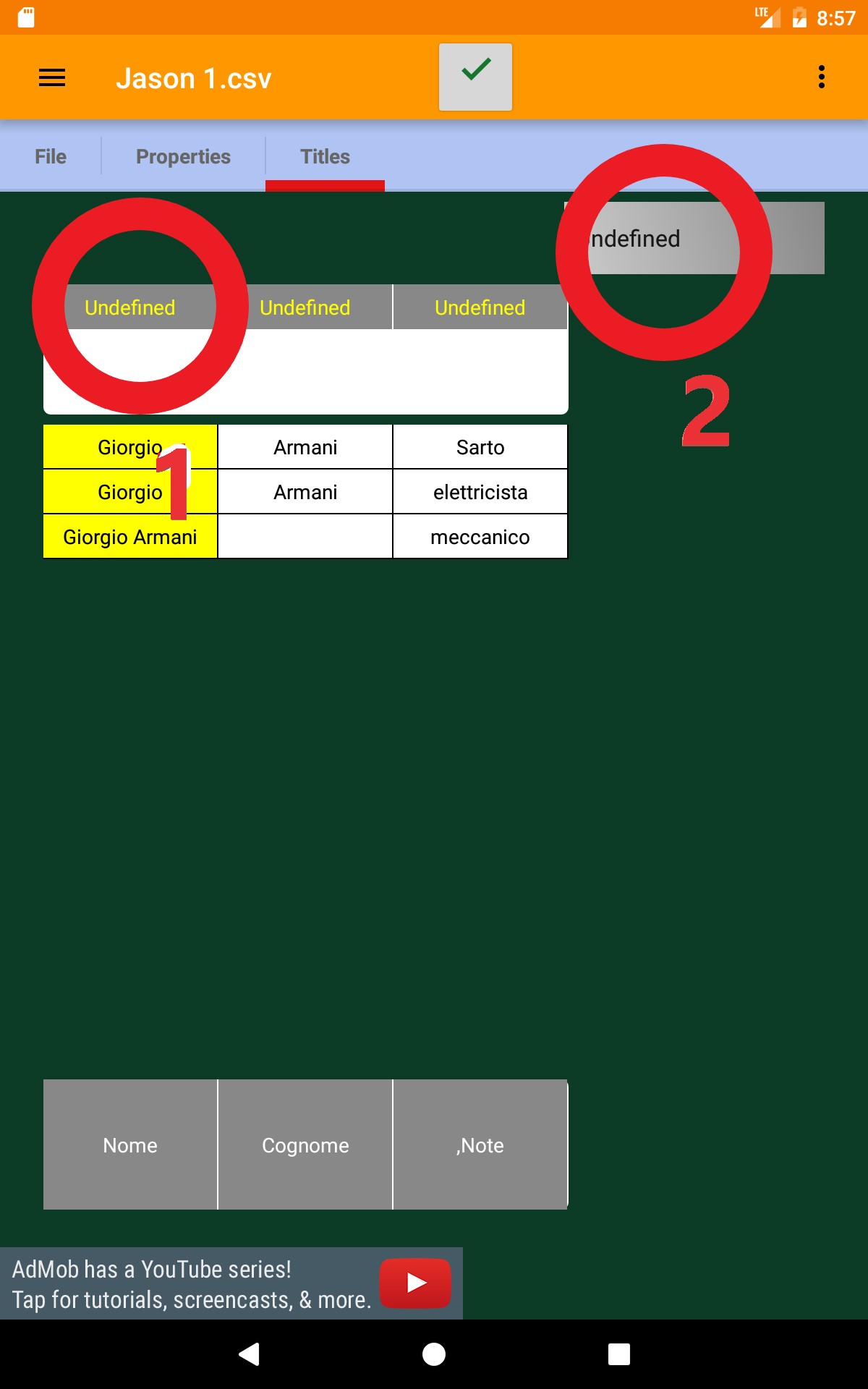 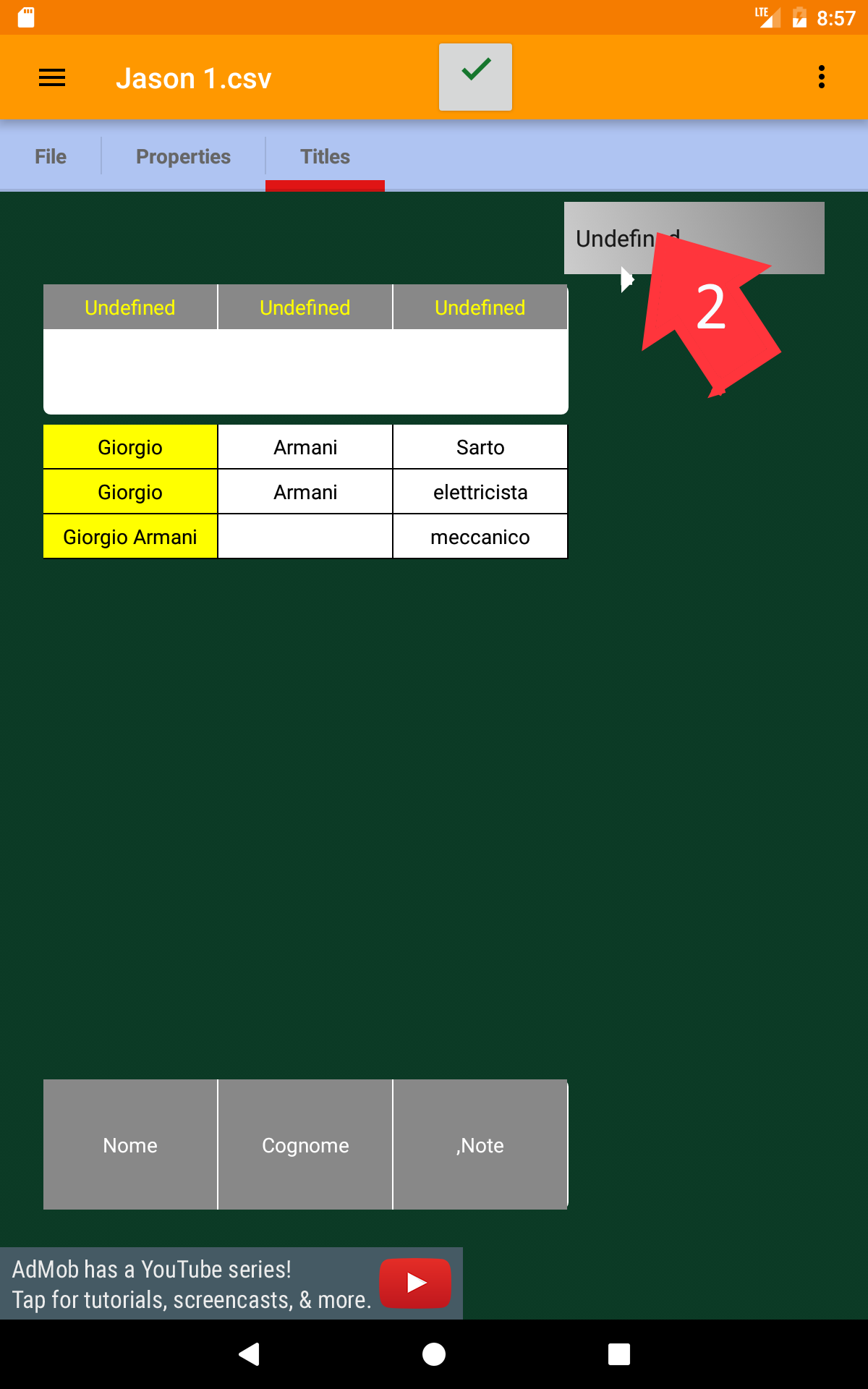 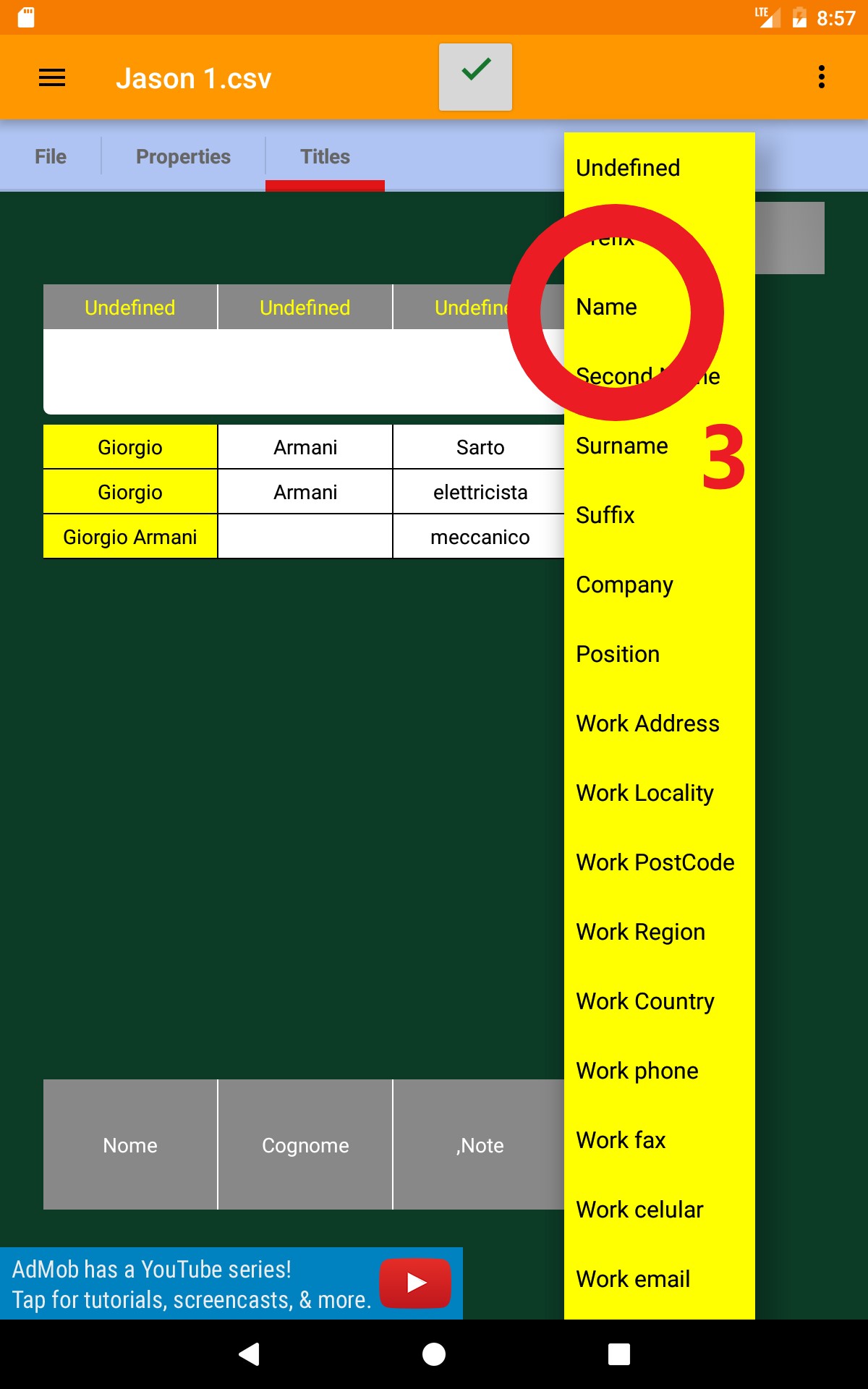 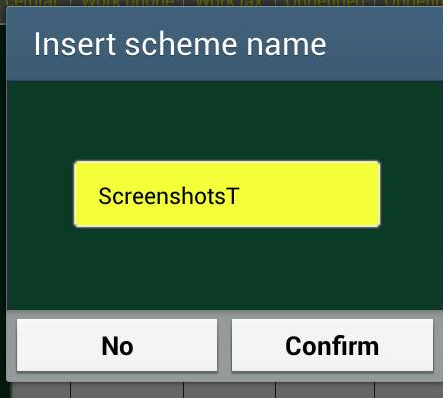 Note: Some slides now refer to the new version that has not yet been published but the operating mechanism is the same.
In the chance you have to import other contacts and the columns of the above are the same or similar, you can use the stored scheme the first time
If the file name is the same, the stored scheme will be loaded automatically. 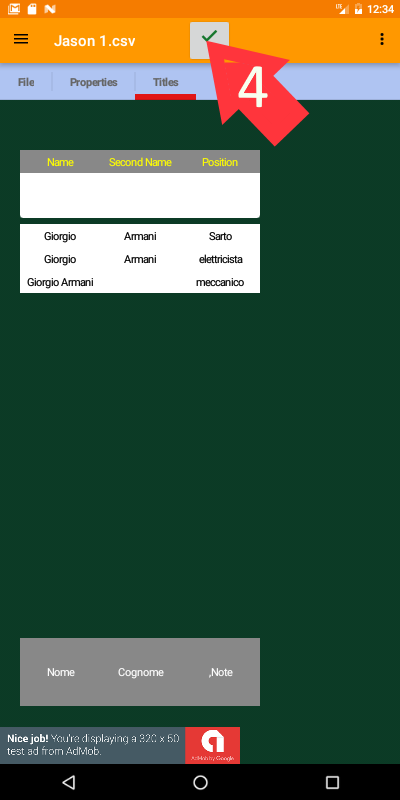 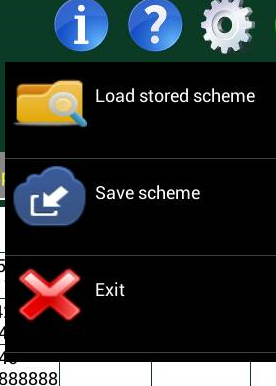 Before importing better control options .
You can select a group to be added to all contacts.
You can select the user preference.
You can also set the Region and Country fields to be added by default when not found in the contact.
It is possible to select a test step. In this case only the first two contacts will be imported. So you can control the outcome in your device before a  total import.
Confirm to start importing.
If not already done in the options, when a contact already exists the app asks you what to do: Ignore to skip the word, completely replace with the new one, carry only not existing fields or add as new contact. 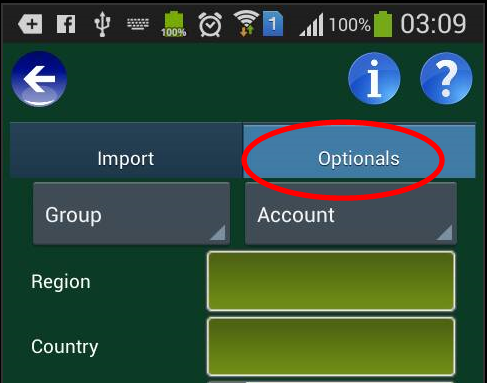 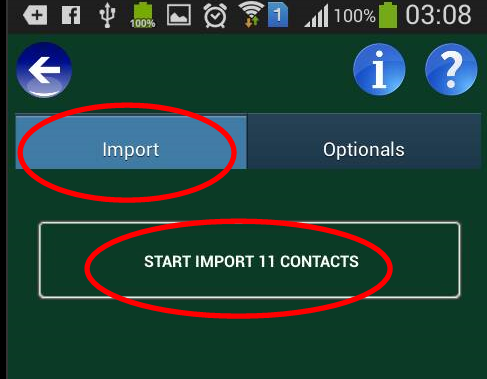 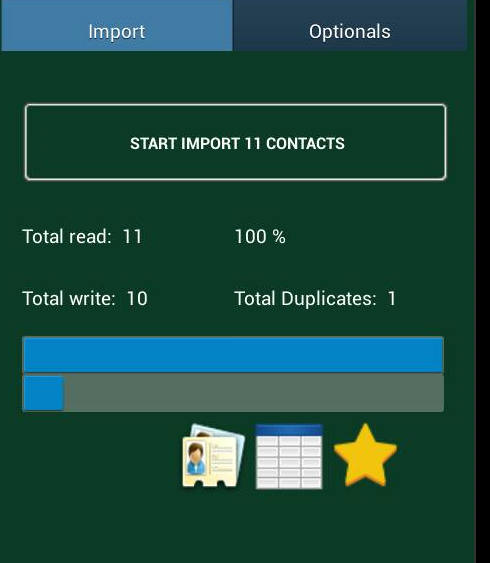 When import ends, you can vision the  imported names. Selecting a name it is possible to display the contact in your bottom line. There are also a list of contacts not imported because of error and a list of non double up was chosen to ignore these contacts. 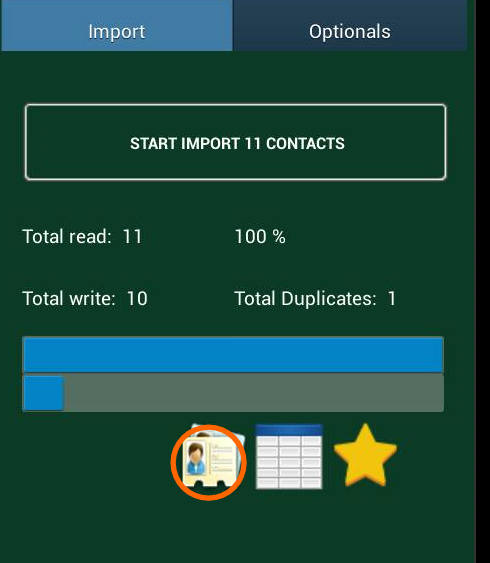 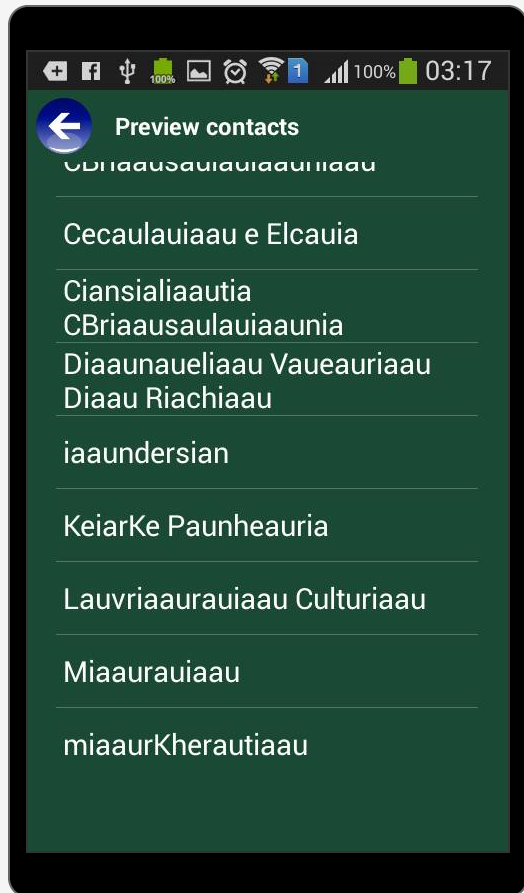 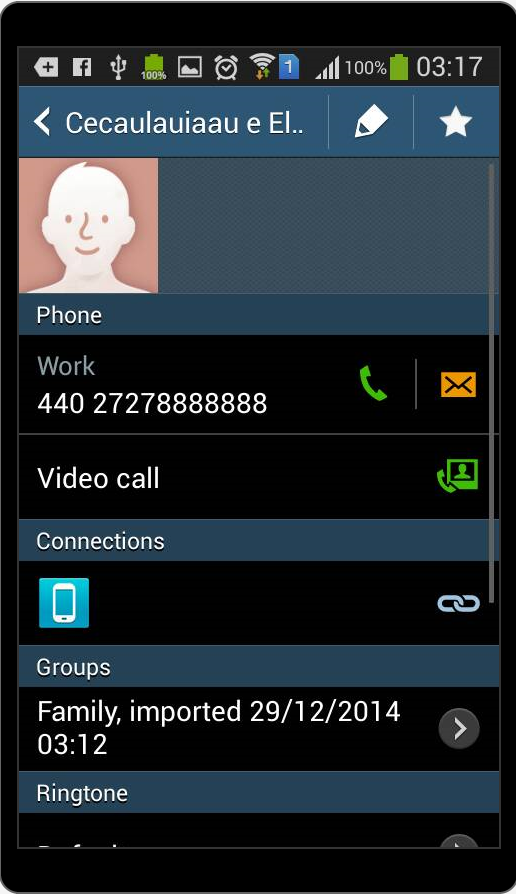 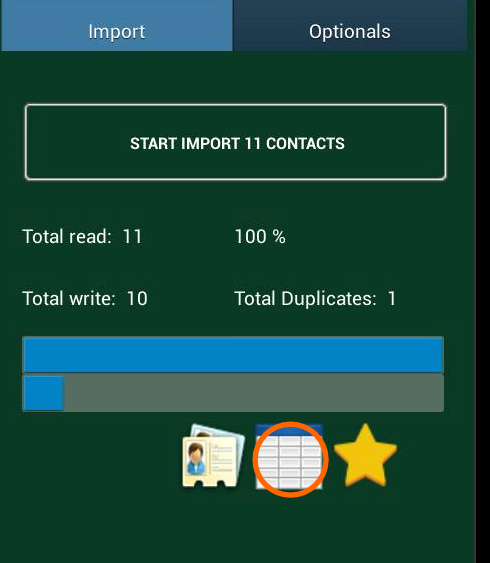 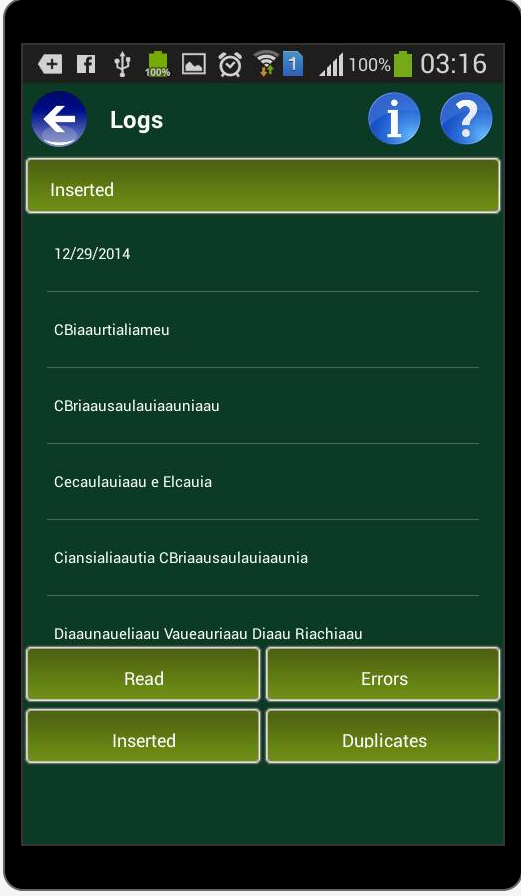 IMPORTANT:
We suggest a backup of your contacts before beginning the matter tion .
Depending on the version of your device, you can back up your device by using the tools. In the same there are many free apps in the market for backup / restore data.
The import time depends on your device, the number of lines and the number of fields per line.
The import stage may have a long preparation is on your device if the memory is running out in the 'old' devices. Try this at a time when not have to use the device for other activities.